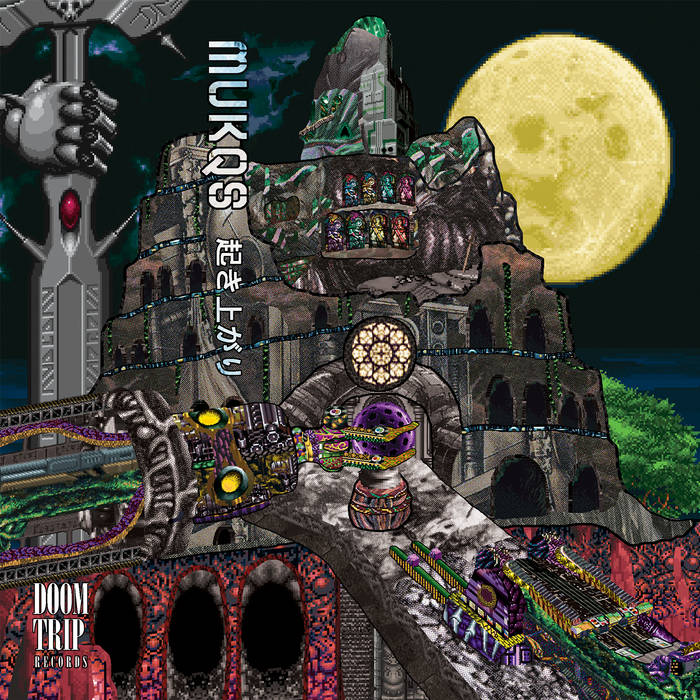 All takes recorded live -- No overdubs -- At Randall.

By J. Edward Keyes - Bandcamp's 7 Essential Releases of the Week:

"Maxwell Allison, who records as Mukqs, has spent the last five years (give or take) issuing a string of electronic albums that split the difference between toe-tapping and head-scratching—often within the space of a single cassette. His absorbing 2016 album Walkthrough, for the Hausu Mountain label, was a collection of eight gently-melodic soft-synth tracks that could have scored an NES adaptation of 2046. His latest—the title of which I am not going to attempt to cut-and-paste here—swings further into experimentation without sacrificing any of Walkthrough’s melodic grounding. Released via the excellent Los Angeles label Doom Trip (If you’re not already following them, I’d suggest you do so now), this tidy little six-track album moves through a variety of electronic environments over its half-hour running time. Opener “Al Saiduq” feels like its set in a ‘30s jungle adventure film, with low-rolling percussion, synths that buzz like insects and bubble like tar pits. “Marble Gallery” veers hard in the other direction, split-second snippets of sound creating a dizzying, non-linear collage of sound. “Ronaldo Kuriki” combines both approaches; there are off-kilter blips and sputters, but also a gentle river of electronics running up the center. And closer “Redfield” oscillates between moody, horror-film synth shrouds and glitchy Godard-like jump-cuts. It’s a fascinating listen, alternately challenging and welcoming."

By Philip Sherburne for Pitchfork:

"His new record is even more groove-oriented, with the fullest, most pristine sound he has achieved yet. Like its predecessors, it was recorded live with no overdubs and no laptop. But heard in the context of a DJ set, you could easily mistake some of this stuff for the output of a self-identifying dance-music producer, rather than something with its roots in the noise scene. Take “ゾッド,” a slowly evolving house excursion that rolls ahead at a textbook 120 beats per minute. The bass, fashioned from tuned toms, is chest-massagingly deep, and the snare and hi-hat programming is a marvel of efficiency. You can hear an echo of early-’90s releases on Aphex Twin’s Rephlex label in its elegant clockworks, while the new-age synths that spill over lumpy machine percussion, like a fogbank cascading over mountaintops, suggest the dreamy style currently emanating from Vancouver, B.C.

It’s an example of his balancing act at its most vertiginous—and its most thrilling. For now, anyway, Mukqs’ sweet spot is this relatively unexplored interzone where noise and groove collide."

By Colin Joyce via Noisey:

"On his new release, 起き上がり, for the up-and-coming imprint Doom Trip, he operates in a few different modes—neon-lit electro, aquatic sampler improvisations, and freaky drones—that are all united under a generally nocturnal spirit. It’s not just that the record is imbued with a darkness, though that’s there to a degree, but it has the liveliness of a city after dark, the sense of constant movement in hidden corners.

Allison’s still probably known for his improvisational experiments with Doug Kaplan and Natalie Chami as Good Willsmith, but over the time that band’s been active he’s also generated a catalog of works on his own that’s at least as worth digging through. Part of the thrill of following him—as with so many underground musicians—is in his prolificacy. At this point I’m basically writing about a new Mukqs tape every six months. But it’s also in his unwillingness to stick to a single form or style, jumping from colorful kosmische, to psychedelic sample collages, to 8-bit ambience from tape to tape."